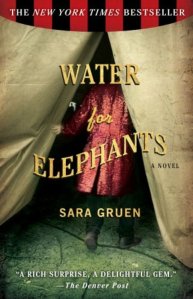 I watched the trailer for the film adaptation of Sara Gruen’s 2006 novel, Water for Elephants and I was mesmerized by the images that I saw.  Robert Pattinson’s in the movie. It does give me a red flag that it would suck, but I thought I would read the source material before possibly watching the movie. I have to say that I am afraid that I would hate the film more that I loved the book so much.

The setting takes place in Depression Era America where a young Cornell veterinary student named Jacob Jankowski has to face the realization of being out on his own when his parents are suddenly killed in a car accident. With no family left, he decides to run away. He stumbles on a traveling circus called Benzini Brothers Most Spectacular Show on Earth where he is not welcomed with opens. He is on the verge of being thrown out when a horse of the beautiful equestrian star, Marlena is sick. Jacob diagnoses the condition and tells Marlena that her horses cannot recover. This devastates her.

Uncle Al is manager of the show decides to take Jacob on as the show’s veterinarian since they have a hodgepodge of performers and animals from other defunct shows. They needed someone cheap to take care the animals in the menagerie.

Things get complicated when Jacob falls in love with Marlena. The trouble is that she is married to the ringmaster, August, who can be charming one minute and insane the next. During his time traveling with the circus, Jacob learns to grow up and be exposed to a world that he has never known.

I was sucked into this fantastical world of sequins, animals, illusions, rubes and performers. I would shut out the world and be engulfed in Gruen’s world that she has constructed. She did the book as a part of National Novel Writing Month, which is a “non-profit organization The Office of Letters and Light. Spanning the month of November, the project challenges participants to write 50,000 words of a new novel in one month.” It’s impressive that a woman who has never seen a circus could be so real about this world.

The affair between Jacob and Marlena was a little melodramatic to my taste, bordering on soap opera level dialogue, but it all changed when a turning point with them changed everything.

Final K.O.: I have a feeling that the book will be infinitely better than the movie that I have seen yet. It is a heartwarming story that needs to be on everyone’s must read list.

Published by: Alfred A. Knopf

First of all, I want to say that when the next Movie Book Smackdown was going to be Cormac McCarthy’s Pulitzer Prize winning 2006 novel, The Road, Kai B. Parker from The List and The MILFcast said that it was his favorite book of all time. That’s a big compliment. Comparing the book to the movie is like comparing Granny Smith apples to Washington apples.

This is a harrowing story about a nameless father and son trying to survive in a postapocalyptic wasteland. The Earth has died, but life still goes on in some aspect. Humanity has turned on itself. The father and son are traveling in a gray, desolate world where they have to watch out for robbers and cannibals.

Reading the book was a much different experience than watching the John Hillcoat movie. The book was an epic, chapter-less story about the survival of a father and his son. The reader goes through the trailers of finding clean drinking water, where their next meal is going to be, building a fire to keep warm from the gray, cold snow and rain. McCarthy’s words are simple, direct and unflinching, describing the horrific conditions of living after the world dies. The primary strength of the book is the father and son relationship. It was the anchor that made me wants to see what will happen to them, even thought it already revealed in the movie what happened.

It made it an uncomfortable experience to read about a black, dead, ashen world that wares on your patience. The run-on sequence of event made me uneasy. Having no quotation marks, no distinction between different characters made you disoriented. In the beginning of the book, the son annoyed the hell out of me with his redundant questions.

Final KO: The book and the movie have their strengths and weaknesses. The book had more establishment of the characters and reading McCarthy’s words made the characters feel like they were in more peril. The movie does some of the mental work for you. You see the desolation, the charred remains of houses, cities and forests. It’s a draw.

I wanted to expand my reviews than have endless movie reviews. This new feature was inspired by a spirited discussion with the guys from The Film Cynics where Brian made a point about not reading the source material before or after seeing a movie. I chimed in that my love a particular book have been ruined by awful adaptations of it… (coughs) Running With Scissors. I thought that I would read books that have been or will be made into movies and give let them fight to the death.

The inaugural review goes to Seth Grahame-Smith’s follow-up to Pride and Prejudice and Zombies named Abraham Lincoln: Vampire Hunter. The premise of the book is self-explanatory. There have been hundreds of biographies about out sixteenth presidents ranging from a slavery sympathizer to a closet homosexual. Why not the next best thing is to transform him into a lean, mean vampire-killing machine?

When a 500-year-old vampire by the name of Henry Struges commissions Grahame-Smith to transform the “six secret journals” of Lincoln’s lifelong battle with the creatures of darkness. Ever since, Abe was a little boy, he would question why his loved ones would be healthy one day and die the next day. He learns the bitter truth about the existence of vampires and makes a solemn vow that he would see each one of them dead. He is recruited by the same Henry Sturges to do just that. You are asking yourself, why would a vampire want to kill his own kind? You just have to fight that out for yourself. Let’s just say it’s about an impending war. It’s not what you think.

My interest was piqued when I saw the cover of the book, especially the back. The idea of the tall, lanky Abraham Lincoln being a badass vamp killer was awesome.

The problem is that he rarely killed as bloodsuckers in the book. He would have his acquaintances carry out some of his assignments for him. The main problem with the book is that Grahame-Smith felt restricted about retelling Lincoln’s life that is bogged down with facts that have heard before with sprinkling of stretched truths. It was like he was afraid to go balls out insane with it. It could have gone further.

My morbid curiosity about the damage of war or ravenous vampires would do to the human body kept my interest to read further. Even though there were sporadic kills in the book, the gory details about blood gushing out, beheadings, plunging axes into chest cavities or brains spilling out of skulls made me cringe and laugh with joy at the same time.

Final KO: Without seeing the movie, I can only hope that the movie was focus more on the killing and less with the facts. If the movie was like  Zombieland, than I would give the advantage to it.