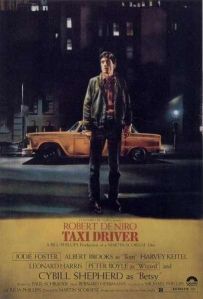 Thank God for the rain to wash the trash off the sidewalk.

Taxi Driver is probably one of Martin Scorsese’s top films that he has helmed. I have to confess that I have never seen the movie. Shame on me. There are some other classics of his that I have not had the chance to see yet, but I won’t name them because I might be whacked. I am making up for it by watching this film. After watching the film, I think I might have reconsidered the #39 Movie of All-Time on IMDb.

A Vietnam vet, Travis Bickle (Robert De Niro) three years discharged from the Marines comes back to the States to an unknown world. He is troubled by the memories of the war. He is a raging insomniac. He spends nights wandering the streets or riding on the subways. Travis seeks a job at a local NYC cab company.

Travis has an internal monologue with himself to cope with dealing with being back in civilian life. He writes his thoughts down on scraps of paper. He doesn’t like what he sees. He wants to get rid of the “scum on the streets”.

A volunteer, Betsy (Cybill Shepherd) that works for a presidential campaign for Sen. Palantine (Leonard Harris), infatuates him. Her co-worker Tom (Albert Brooks) is weary when Travis parks outside of the office and stares at her. Later, he wants to volunteer for the campaign so he could be with her more. His true intention is to ask her out.

At a local hangout, he hangs out with Wizard (Peter Boyle), Doughboy (Harry Northup), and Charlie T (Norman Matlock). They talk about the taxicab confessions about what happens in their cabs or on the radio as they drive around. One of the guys ask if he has a gun, Travis doesn’t want to have anything to do with guns since his time in Vietnam.

The more that Travis does not sleep, the more his mind begins to give way. All of his relationships are affected until he snaps. He becomes a solider is his own right: changing his drinking, eating habits and fitness regimen. He buys a couple of guns to wreak havoc on the scum of the earth.

The world of Taxi Driver is steeped in filth as it took place in 1970s. The locations to the score by Bernard Hermann evoke sleaziness. Travis Bickle is a walking contradiction that he wants to rid the scum of the earth, but he wants to save an underage prostitute, Iris (Jodie Foster) from her pimp, Sport (Harvey Keitel).

I think I had too many expectations for this film, because it is held in such high esteem. I thought the pacing was a detriment to the quality of the movie. I found myself essentially bored with it. Another moment that ruined the movie for me was when Martin Scorsese was in front of the camera. That scene in the back of Travis’ cab completely took me out.

Judgment: Ultimately, I wish that I could see more of Travis’ decent into madness. I felt that it was cut out.