The stars will wheel forth from their daytime hiding places; and one of those lights, slightly brighter than the rest, will be my wingtip passing over.

Jason Reitman’s latest film is getting considerable awards attention as of late. I was surprised that it was playing at my local theater. Going into the movie, I didn’t want to have too much expectation of it, because I might be disappointed with it. Ultimately, the movie is a wake-up call that people cannot live a solitary life.

Based on the book by Walter Kirn, Up in the Air tells the story of Ryan Bingham (George Clooney), an “executive efficiency expert”, which is a fancy term for a mediator that a company hires to fire their employees without doing the firing themselves. He is ultimately content in his life living from Hilton hotel to Hilton hotel, renting cars from Hertz and living out of one nicely packed carry-on. He travels 322 days out of the year and he wants to rack up many flier miles that he can so he could reach his ultimate goal of ten million miles that six people accomplished before.

His life takes a detour at a hotel bar when he meets the vivacious Alex (Vera Farmiga) who literally charms the pants off of him. She is on the same boat as Ryan. They both enjoy the allure of racking up frequent flyer miles and keeping up with multiple membership cards. They both have an understanding their relationship is strictly casual to where they intersect on their different travel schedules.

His boss, Craig Gregory (Jason Bateman), calls Ryan back to home base at the Career Transition Corporation, where he lets the other experts knows that their face-to-face methodology is obsolete. A young Cornell grad student named Natalie Keener (Anna Kendrick) shows the experts that a better way to be more efficient is to fire people via e-conference.

This does not sit well with Ryan, whose whole livelihood is built around not being grounded in one place for too long. Craig thought that it would be best for Ryan is bring Natalie along on his firing runs so she could better prepare the technology before Ryan becomes irrelevant.

For a man that doesn’t want to have anybody is his life, these two women, Alex and Natalie start to become a chink in his armor. He slowly begins to realize that his life is all that is it cracked up to be. He needs to face reality and have a human reconnection with somebody.

The movie is like a plane taking off. Sorry for the metaphor, but go with me on this. When it gets off the ground, it’s a little bumpy. It steadily gets better as it progresses toward the end. I did have a problem with the motivations of Alex. I can’t explain it here. Watch for it in the spoiler section.

The performances were solid across the board. Clooney was basically playing himself expect he was more cold and distant about how he doesn’t care about the countless lives that he change. Farmiga showed subtle exuberance in her approach of the love interest that tickles Ryan’s fancy. Kendrick was a small fish going into a ocean full of piranhas, but she is a scrappy girl that is not afraid to tell it like it is.

Judgment: This movie is a relevant take on if bad things happen, good things come around the corner.

END_OF_DOCUMENT_TOKEN_TO_BE_REPLACED

You should’ve gone to China, you know, ’cause I hear they give away babies like free iPods. You know, they pretty much just put them in those t-shirt guns and shoot them out at sporting events.

I haven’t seen Juno since it was in theaters during the Oscar hoopla in 2007. There has been considerable backlash with this movie like any other movie that receives a lot of buzz that it could give you a migraine. Re-visting this movie again, I still think it’s a sweet story that has a lot of heart over the off-putting dialogue.

Juno MacGruff (Ellen Page) is sixteen-year-old pseudo-intellectual hipster Minnesota girl that finds out that she is pregnant with her Tic-Tac popping best friend, Paulie Bleecker’s (Michael Cera) baby. Freaked out by the news, she wants to have a quick abortion, but she decides to have the baby.

She tells her synergistic cheerleader best girl friend, Leah (Olivia Thirlby) who thinks that she has a food baby. (A Diablo Cody-ism). When she tells Paulie, he was surprised that she was preggers, since they had sex when they were bored.

Deciding to give the baby away, Leah and Juno look for prospective adoptive parents in the local “Penny Saver”. They come across an ad with a huge picture of the perfect married couple, Vanessa and Mark Loring (Jennifer Garner, Jason Bateman). Juno thinks that they could be the ones to take care of her baby.

Before meeting the adoptive parents, Juno has to drop the news to her father, Mac (J.K. Simmons) and stepmother, Bren (Allison Janney). When she does, they thought that she was drug addict or a big sloppy drunk. The news was worse then they imagined.

Mac and Juno drive up to St. Cloud where the Lorings live. Juno gathers that Vanessa is a prim and proper, uptight woman who just wants to be a mother. Other the other hand, Mark is a laidback jingle writer that is more of man-child, someone that she could vibe with about retro slasher films, Les Paul guitars and vintage rock ‘n roll.

Should the film been nominated for Best Picture? Of course not. The only reason that the movie was, because of the buzz that surrounded the movie; Fox Searchlight can put on an Oscar campaign like Harvey Weinstein. It was easily accessible.

Universally the dialogue has been a problem for people. Sometimes it could be too right on the nose or you wonder the fuck did they just say. I think the performances saved the movie for sucking big time. As much as I don’t like Michael Cera, he was less Cera-like, because he had a supporting role in this film.

Judgment: If you could get past the first third of this film, then you will enjoy this film.

It’s that time again for my running feature to highlight those fantastic actors that are overshadowed by hacktors and hacktresses. Today, we focus on the supporting players.

I first saw J.K. on the HBO series Oz where he played the Aryan leader, Vern Schillinger. He was fantastic in the role. You recognize him from such films The Cider House Rules, Thank You for Smoking, Juno, Burn After Reading, I Love You Man, Extract and the Spider Man franchise. He is currently on the TBS series, The Closer as Assistant Chief Will Pope

He is a character actor that could disappear into every role from a neo-Nazi skinhead, a sympathetic father, a brash newspaper editor to the voice of the yellow M&M in those commercials.

Judy Greer has played second fiddle of less talented actresses for more than a decade. Her first recognizable role with in the dark comedy Jawbreaker as the ugly duckling turned mean girl.  Every since then she has been cast as the “best friend” in such movies as  The Wedding Planner with Jennifer Lopez, 13 Going on 30 with Jennifer Garner, 27 Dresses with Katharine Heigl, and her latest Love Happens with Jennifer Aniston.

Judy deserves better than what she has got. The bit parts and walk-ons she has over the years, she manages to make a sucky role into something memorable with her stoic, nonchalant delivery. She knows that he best friends is stupid. She always needs to snap her out of it.

I hope that these two would get some more substantial roles in future that could highlight their talent. 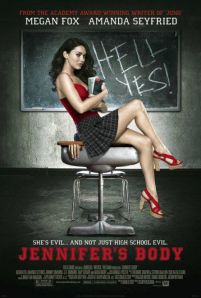 It smells like Thai food in here. Have you guys been fucking?

Jennifer’s Body is the follow up to screenwriter Diablo Cody’s Oscar winning, Juno. After watching some of her work on television with The United States of Tara and this, I have a feeling that she was just a one trick pony.

Taking place in Devil’s Kettle (how fitting of a name?), the story mostly revolves around Needy (Amanda Seyfried) spiraling into madness after what happened to her classmates months prior.

She recounts the good times that she had with her boyfriend, Chip (Johnny Simmons) and her best friend, Jennifer (Megan Fox). The girls are the unlikeliest of friends, she is nerdy girl and Jennifer’s the popular beautiful cheerleader. Everybody questions why they are hanging out together. She doesn’t see anything wrong with that.

One night when the girls are at bar, there is a fire. Lots of death and destruction. Needy is torn up about it, but Jennifer is cavalier about it. She goes into the back of the van of the band playing that night, Low Shoulder. Needy has a bizarre incident when Jennifer back at her house when she appears covered in blood and puking black sludge.

Needy notices a change in her friend. It turns out that Jennifer is not “high school evil”. She is possessed by soul sucking sex demon that is killing the boys in the school in order to keep up her exterior beauty. If she doesn’t feed, she would look like a hot ass mess.

There is a reason why Jennifer is turned into the demon. I will discuss that in the spoiler section of the review.

The reasons to see this movie is Amanda Seyfried. She is very good in the movie. Very convincing. There is also the signature Diablo Cody dialogue that saves the film from being total shit.

Megan Fox is not horrible in the movie. She was fine. I think she was better when she was in her bitchy dark humor mode. Everything else falls flat.

Judgment: This movie tries to be a 2000 version of Heathers. Fail.

END_OF_DOCUMENT_TOKEN_TO_BE_REPLACED

After I was cheering and screaming at the television when I heard the Golden Globe nominations, I wanted to try to see the a good portion of the movies that are nominated before the ceremony on January 11th. This movie, Burn After Reading, was nominated for Best Actress, Frances McDormand and Best Picture Comedy/Musical.

I saw the film and I was disappointed with it. After the masterpiece, No Country for Old Men, I was expecting alot more from the Coen Brothers. You have Oscars falling out of their asses with Clooney, Swinton, Pitt, McDormand, Jenkins, and Malkovich. I was bored.

I did not care about these characters. The situations were ridiculous. I was underwhelmed. The Coens are not good with straight comedy. Anybody heard of The Ladykillers? Intolerable Cruelty ?

I thought that this movie would be like O Brother, Where Art Thou?, Raising Arizona and The Big Lebowski. It’s not. Not by a longshot.

Avoid this movie. It will not win the Golden Globe.