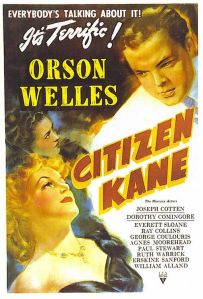 Citizen Kane is another movie that I was embarrassed that I never seen until this morning. It is currently #32 of the Top 250 of all time on IMDB. It was nominated for nine Oscars and it won for Best Screenplay. This is great film making, but it does have some flaws.

Recounting the tumultuous life of wealthy tycoon, Charles Foster Kane (Orson Welles) when he dies at the beginning of the story. He uttered his famous last word, “Rosebud.” The main thrust of the story is a reporter trying to meaning of the Kane’s final word.

The camera shots with objects, people, lighting in three different distances in great.

The ten minute newsreel footage in the beginning of the movie turned me off.

I had some problems with the pacing. I thought that the film was three hours long. It was only two, but it felt like five. It moved like molasses in some sections. I had to take a break to eat something. I almost dozed off.

Dorothy Comingore as Susan was good, but at times, she got on my nerves with her squeaky voice. When she sang, it was beautiful. When she was not yelling, I loved her, but when she did yell, I wanted to turn the movie off.

The whole reveal of what Rosebud was anti-climatic. I knew what it was before it was revealed. When I thought about it, Rosebud had to deal with the life that he left behind to be the person that he didn’t want to be. It was understandable.