Indiana Jones and the Raiders of the Lost Ark (1981) 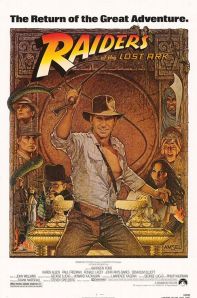 You want to talk to God? Let’s go see him together, I’ve got nothing better to do.

Don’t hate me, but I have never seen the first installment in the Indiana Jones quadrilogy in its entirety. I have seen the classic scenes of the giant boulder, the room filled with the snakes and the melting Nazis. This is the first time that I saw Indiana Jones and the Raiders of the Lost Ark. I am so glad that I did. It’s #18 of the Top 25o Films of All Time on IMDb.

I am more of a Temple of Doom person. Some people don’t like that flick. I enjoy that it was campy and completely implausible.

In 1936, the famous archaeologist, Dr. Jones (Harrison Ford) is sent out on a mission to recover the Ark of the Covenant that once contained the Ten Commandants. He has to get it before Hitler and the Third Reich gain trouble control of it and have his army become invincible.

The first stop in Jones’ trip is Nepal where he meets an old love interest of his, Marion (Karen Allen). He tries to regain of the pieces of a magical staff that would guide the way to find the ark.

During the time there, a mysterious man in a black trench, Toht (Ronald Lacey) also seeks the artifact in Marion’s possession. There is a struggle. The duo escapes but not for long.

Hearing that the ark was moved to Cairo, they meet up with a famous digger, Sallah (John Rhys-Davies) to help with the effort.

The Nazis are not far behind in their quest to find the Ark with Jones’ French counterpart Bellroq (Paul Freeman), the Nazi officer, Colonel Dietrich (Wolf Kahler) and Toht.

It’s common knowledge by now it that producers wanted Tom Selleck in the role of Dr. Jones. I can only imagine about Selleck in the movie. It would have been cool if you wasn’t working on Magnum PI at the time. Harrison Ford is not a bad choice for Indy. He is damn sexy in the movie. You gotta love a man that can handle a whip. Mmm-hmm.

The action sequences and the jokes in the movie were great. The ending of the movie was anti-climatic and borderline silly, but other than that, a good time all around.

Judgment: A worthy installment in the Indiana Jones mythology.