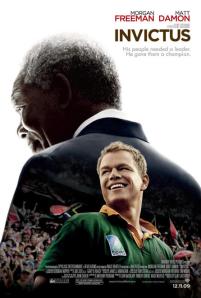 This country’s changed. We need to change as well.

Since the announcement of Clint Eastwood on the next LAMB in the Director’s Chair, I am trying to watch more of his movies for the upcoming three-day fest. I thought I might kill two birds with one stone with seeing Invictus. Based on the novel, “Play the Enemy” by John Carlin, the movie tells the story of Nelson Mandela trying to unite the nation after Apartheid. This movie is getting some critical acclaim. I don’t see why it does.

Morgan Freeman channels Mandela as the movie chronicles five years in the life of Mandela beginning on February 11, 1990 when he was released after two decades of imprisonment. The country is torn apart by a civil war brewing between the Africans and the Afrikaans.

Mandela becomes president and when takes the office some of the white staff threaten to quit. The remnants of racial tensions are still thick in the air. Mandela needed to find a way to unit the country of South Africa as one. He goes to a rugby match where the Springbok rugby team, headed by François Pienaar (Matt Damon). The team is not doing their best.

Mandela wants to meet with the captain of the Springbok team to discuss how they could help the nation heal from Apartheid. The encouragement of Mandela inspires the team to train for the World Cup in 1995. Mandela almost pushes his presidential duties aside to focus on the rugby team and make them succeed.

I don’t know jack shit about rugby. It looks like American football to me without the figure hugging spandex. The biggest problem of the movie was that. Americans don’t care about sports that know nothing about. I thought I was going to see a movie about Mandela struggle to readjust to civilian life after a lengthy imprisonment, but I have to research that myself.

Morgan Freeman and Matt Damon are getting some critical acclaim for this film. I thought that they were fine. Freeman looked like Mandela, but his accent slipped in and out when he monologued about retaining the Springbok’s colors or when Freeman did his signature voice-over. That took me out.

Matt Damon’s character was just there. He was the pawn for Mandela. Move here. Move there. You can win the World Cup if you do as I say. Mandela felt like he was obsessed with the team that he would risk his health and even the state of country in order for the Springbok to succeed.

I thought François was written like a caricature. There was nothing remarkable about him. I didn’t believe that he would lead a rugby team to the World Cup. (Oh, please, it’s not a spoiler. It’s history.) I couldn’t help but wonder if Matt Damon has a prosthetic nose. If he did, it was distracting.

Eastwood still delivers stunning visuals of the multiple fans in the Ellis Park Stadium watching the Springbok play. The mix of shadows and light is always great, but the film as a whole felt empty. In the climactic match, there was a lot of slow motion. Too much slow motion. Even the spectators watching the game were in slow motion. Why? That match was as slow as molasses.

Judgment: The movie was awkward, clunky and uninspiring. I was disappointed.