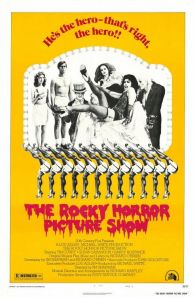 I would like, if I may, to take you on a strange journey.

The cult classic musical The Rocky Horror Picture Show has been entrenched in American culture since it bombed at the box office in 1975. I always wanted to go to the midnight showings of this movie, but I didn’t want to feel like a noob going there. I am familiar with the music seeing that I have the soundtrack to the 2001 Broadway revival. I get a kick out of going back into a time warp to visit Dr. Frank-N-Furter and his cretins of the night.

Nostalgia floods back when the first thing you see is those flame red lips singing the opening number about this tale of an uptight couple; Brad Majors (Barry Bostwick) and Janet Weiss (Susan Sarandon) getting stranded one fateful night in a rainstorm. The Criminologist (Charles Gray) that recalls the events of that night narrates the tale.

They arrive at the castle of Dr. Frank-N-Furter (Tim Curry) with his band of misfits, abused manservant Riff-Raff (Richard O’Brien), maid Magenta (Patricia Quinn) and groupie Columbia (Little Nell). Brad wants to use the telephone to get the car fixed, but the Doctor has other plans for the twosome.

He wants them to witness the birth of his perfect companion, Rocky Horror (Peter Hinwood). As the night progress, the Transylvanians’ influence corrupts the good couple.

Everybody knows that the acting is not good bordering on soap opera melodrama. The music is spastic like the cast sucked helium before recording the soundtrack. Is it bad or is it so bad that it’s good?

Judgment: There is something enjoyable about this trainwreck of a movie. 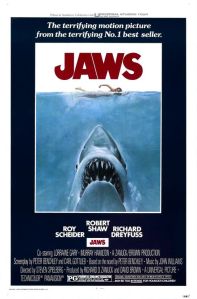 I’m not going to waste my time arguing with a man who’s lining up to be a hot lunch.

Jaws is a movie that I’m embarrassed that I have never seen in its entirety. I caught a piece here and a piece there over the years. I have never seen the whole film in one setting. Being #110 of the Top 250 Films of All-Time, it is quite a testament for when the right actors, director, writing and score come together to make a thrilling viewing experience.

During the Fourth of July weekend, a tiny New England community Amity Island is terrorized by a shark that is picking off some of the people in the water.

The frazzled new chief of police, Brody (Roy Schneider) is left with the task of trying to get rid of the menace in the ocean. Hooper (Richard Dreyfuss), an oceanographer  is sent to town to determine what kind of shark is hungry for human flesh. He deduces that a twenty-foot great white shark is responsible for the damage.

Mayor Vaughn (Murray Hamilton) only mission to have the beaches open so the town could get the revenue from the vacationers that visit them, thus endearing their community further.

An eccentric fisherman, Quint (Robert Shaw) offers his services to kill the shark for a certain amount of money. The town thinks that he is crazy that one person could take on a shark on his own.

Eventually, the mayor agrees to let Brody, Quint and Hooper to go and try to kill the shark before it kills again.

Everybody knows that Spielberg was having problems with the shark to work right. It was an ingenious idea not to have the shark that much in the movie. John Williams’ score perfectly compliments the suspense that is conveyed on screen with having the animatronic shark ruining the movie.

Having the knowledge that the shark was fake, I was still scared at certain portions of the movie. Scenes with detached limbs almost made me lose my lunch. It was still a good suspenseful movie.

Judgment: If you want to know why Black people don’t swim, this is a perfect example of that.