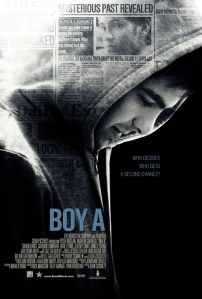 Here is another film that popped up in my radar because of the hosts of Filmspotting enjoyed the lead performance in Boy A. I didn’t know that much about the movie from the start. I saw the trailer and a plot description; it had more intrigued to see the film. It was a television movie over in England before it was released theatrically here a year later.

Based on the novel by Jonathan Trigell tells the story of a 24-year-old young man, Jack Burridge (Andrew Garfield) is released from jail after a lengthy prison sentence. He wants to start his life over, because he doesn’t want to be that guy anymore. A rehabilitation worker, Terry (Peter Mullan) is assigned to Jack to help him integrate back into normal life in Manchester. Terry pretends to be Jack’s uncle to give Jack a place to live at a friends, Kelly’s (Siobhan Finneran) flat and helps him find work at DV Deliveries.

Jack has a police presence staked out in front of the house when he gets settled in. Alone in his room, Jack has flashbacks from when he was a kid (Alfie Owen) befriending a fellow troublemaker, Philip (Taylor Doherty) as they skip school, shoplift food and stand up to a couple of bullies. Philip confides in him about being raped by a family member. They become very couple when they make a grave mistake that affected their lives forever.

Jack is wondering about the circumstance of what happened to Philip when he was in jail. Did he commit suicide or was he killed by fellow inmates? He wants Terry to find out what exactly happen to him. Terry’s underachieving son, Zeb (James Young) appears on his doorstep because he has become homeless and has no place to go. He seems uninterested in having a life outside of the house.

Starting out on his new job, Jack becomes from friends with Chris Cowie (Shaun Evans) who is his delivery partner. Jack tries to become more accustomed to his new life that he is too shy to know that the company secretary, Michelle (Katie Lyons) is interested in him. On a night on the town with the boys from work, a different side of Jack comes out when Chris is getting hit from a group of guys and he steps in to save him.

Taking a drive back to the warehouse one day, Jack notices a broken stone wall. They go to investigate and find a car crashed against tree over an embankment. Jack saves a little girl. Afterwards, Jack and Chris are labeled heroes around Manchester. They feel pretty good about themselves, but Jack doesn’t want to have a picture taken. He tries to hide his face. When Jack’s face hits the newspapers his dark past he has been running from come back to haunt him and destroy everything that he ever worked for.

Granted that this movie was originality shown on broadcast television made me a little hesitant about the pacing, because it is a slow burn for most of it. It was like watching a rubber band being slowly stretched out. Nothing really happened until the last twenty minutes of the movie. I thought this was a fascinating exploration of redemption. Can you escape from your past? Will you ever forget what has been done?

Judgment: I would say, watch this movie, hang on to the end, and you will not regret it.