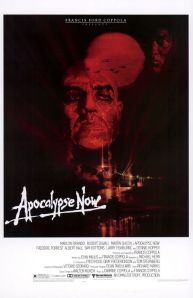 What do you call it when the assassins accuse the assassin? A lie. A lie and we have to be merciful.

I have no idea what is my problem. There are so many classic movies that I have never seen. Francis Ford Coppola’s epic movie, the #36 Film of All-Time on IMDb, Apocolypse Now is one of many. I knew very little about this movie when I saw it. It was a good thing, because would not have enjoyed it more than I did. It was nominated for eight Academy Awards and won two for Best Sound and Cinematography.

A disillusioned Army Captain Benjamin L. Willard (Martin Sheen) is tired of waiting around to find action in and around Saigon. he is finally recruited by Con-Sec Intelligence for a top-secret mission in Nha Trang. Willard meets with Colonel Lucas (Harrison Ford) and General Corman (G.D. Spradlin) to talk about the mission.

There is a decorated Green Beret named Col. Walter E. Kurtz (Marlon Brando) that has played renegade with his own missions with the consent of the US government. At first, Kurtz was praised for his efforts, but soon his leadership skills are questioned when he goes rogue. The men listen to secret tapes of Kurtz talking about the possibility that he is insane and that his actions are monstrous.

They let Willard know that Kurtz has crossed into Cambodia with his Montaguard army to take over a tribe there. There is a warrant out for Kurtz’s arrest for the murder of four Vietnamese Intelligence agents that he thinks were working as double agents. His ultimate mission to follow the Kurtz’s path to Cambodia, infiltrate his team and eliminate him.

To accomplish his mission, Willard is take on a Navy patrol boat down the river.  There is the surfer, Lance B. Johnson (Sam Bottoms), Jay “Chef” Hicks (Frederic Forrest) and 17-year-old, Tyrone “Clean” Miller (Laurence Fishburne) make this ragtag group that Willard has to deal with. There is the captain of the boat, Chief Phillips (Albert Hall) that knows that Willard is not being escorted down the river just for R&R. He knows something big is about to happen.

The movie was an example of how war cam fuck you up mentally, physically, and emotionally. Sometimes when you are in a life and death situation for so long that your moral core erodes away and you don’t know the difference between right and wrong. The actions of some of the characters are awful and despicable, but their conscience is not there.

The movie is dirty and beautiful at the same time. Who knew that Wagner’s “Ride of the Valkyries” could fit perfectly with bombing of a Vietcong village?

Judgment: This movie shook me to the core.

I did not mean for this to be a Kasi Lemmon’s double feature, but I was taken aback when I saw her name as the director of Talk to Me. I vaguely remember the movie when it was in theaters in 2007. It seemed like a nice enough movie, but I never got the nerve to watch until now. I’m glad I did.

An uptight radio program director, Dewey Hughes (Chiwetel Ejiofor) visits his brother, Milo (Mike Epps) in prison. He comes out of obligation. They overhear an abrasive voice coming over the loudspeaker. It belongs to do Ralph Waldo “Petey” Greene, Jr. (Don Cheadle) who is broadcasting his show out of Warden Smithers (Peter MacNeill) office. Milo has been writing Dewey about Petey.

The station that Dewey works for, WOL is sagging listenership and is looking for a new deejay to replace Sunny Jim Kelsey (Vondie Curtis-Hall) in the morning shift. Dewey doesn’t like Petey’s delivery and tries to leave the prison. Dewey is cornered by Petey’s main squeeze, Vernell (Taraji P. Henson) to give him a chance when he gets out of the joint.

Dewey blindly agree to it. When Petey is released from prison and come barging through the doors asking for the job, Dewey acts stupid about it. After not getting the position, Petey decides to protest the station doors until he could get the position. Dewey asks the station owner, Mr. Sonderling (Martin Sheen) to give him an opportunity.

After a shaky start, Petey becomes a prominent voice of the black community during the civil rights movement in the late 60s. No other station was talking about black issues at the time. People needed to hear the stories that are happening in their community.

I was laughing my ass off with this movie. Don Cheadle has a delivery that make you believe that he is this character. I enjoyed the way that Petey told it like it is. He didn’t give a damn about who he offended. Some things needed to be said. I loved that. Chiwetel Ejiofor was great as Dewey. He even won the Indie Spirit Award for his performance. It was well-deserved.

Judgment: I love watching a story about a person that I never heard of and I would like to get the chance to know more.