After I was surprised that enjoyed the batshit crazy movie Crank by directors Neveldine/Taylor, here comes the WTF sequel to the film, Crank: High Voltage. I didn’t see this movie in the theaters because of the bad buzz surrounding it. It tried to top everything that happened in the first movie that nobody could enjoy it.

If you haven’t seen the first movie, I will spoil the ending to that movie to introduce this movie. Be warned.

Picking up three months where the first movie left off, Chev Cheilos (Jason Statham) falls to his supposed death on the concrete after killing the bad guy in a helicopter. His body is quickly recovered by the Chinese mob, The Traids where a pair of surgeons in a dingy backroom promptly cut out his heart and replaces it with an artificial one. Chev quickly dispenses both of them when the new heart starts up.

He gets the name of the person that his “strawberry tart”, Johnny Vang (Art Hsu) from a thug that he sodomized with a lubed shotgun. He has taken his heart in a cooler to an old man named Poon Dong (David Carradine). The one heart that would continue to beat after a person was clinically dead.

Chev realizes that he is attached to a monitoring machine that measures how much power the heart has left. He calls Doc Miles (Dwight Yoakum) to tell him that he doesn’t have time to repower. He gets into a car crash that destroys the device. The only thing he could do is create static electricity to keep it pumping.

He goes to the Cypress Social Club where some of the Triads are at and cleans house trying to find Vang Vang narrowly escapes with the cooler in his hands. Chev meets a hooker, Ria (Bai Ling) who knows where Johnny Vang is at, a local titty bar where Chev’s girlfriend, Eve (Amy Grant) is dancing at. Thinking that Chev was dead, Amy tried to make a living.

In a backroom, Johnny is roughed up by a rival gang member, Chico (Joseph Julian Soria). Chico wants to get the heart for his boss, El Huron (Clifton Collins, Jr.) who wants to settle a debt. Johnny wants to make a deal. There is a confrontation with the gang and Chev with a shoot-out in the club. Vang slips away again.

The police catch up with Chev for the bloodbath at the strip club and what happened three months earlier. He meets Venus (Efren Ramierz) who is the twin brother of Kaylo who was killed in the first movie. Venus has full body Tourette’s. He tries to make any way to receive an electrical charge from tasers to shock collars to dry humping an old lady. Chev goes to the Hollywood Horse Track to find Vang and get his heart back.

I checked my brain at the door when I saw the first movie. This movie is ridiculous with the quick cuts, the non-stop action, the score were too much for me to handle. It was like this movie was on crack. There are no words to express how insane this movie is. Wait a minute. I have three words for you, “Godzilla fighting sequence.”

Judgment: I cannot recommend this movie that anyone that this sober. You have to be a crystal meth to enjoy this movie.

Does it look like I got cunt written on my head? Who do you think you are fucking with?

The high intensity action movie Crank was never my kind of movie. I am the big action anti-hero movie kind of guy. Directors Neveldine/Taylor has a reputation of having a buffed anti-hero kicking ass and taking names with jump cuts, thumping music and saturated lens. It feels like combination between Danny Boyle, Tony Scott and Renny Harlin. That may not end up as a good thing.

Chev Chelios (Jason Statham) is a contract killer for a Los Angles crime syndicate. He wakes up to find himself a groggy mess. There is a video playing of Ricky Verona (Jose Pablo Cantillo) drugging him with the “Beijing Cocktail” on Chev’s TV. Ricky’s motive for the injection is retribution for not killing Don Kim (Keone Young).

Little does Chev know is that the serum slows down his heart. He has one hour to live before the serum kills him. He calls Doc Miles (Dwight Yoakum). Doc informs Chev that he has to keep his heart pumping with adrenaline to stay alive by any means necessary from coke, tossing back Red Bulls, car chases, and nasal spray or fucking his brains out with his pothead girlfriend, Eve (Amy Smart).

He wants to seek revenge on Ricky. He enlists the help of his gay friend, Kaylo (Efren Ramirez) to get Chev closer to getting Ricky. Chev realizes that his boss Carlito (Carlos Sanz) is conspiring with Ricky for Chev not finishing the job.

As Chev stretches his limited time, Doc Miles tells him that he needs to find epinephrine. He tears Los Angeles apart to get the drug. He overdoses on the epinephrine and he has to burn it off.

From the get go, the movie is beyond reality with the ridiculous premise. I understand the movie is supposed to be frenetic and fast paced. Sometimes it could be too much. I believe that Neveldine/Taylor knows that the movie is ridiculous and treat it as much. There was the WTF sequel Crank: High Voltage that came out earlier this year, it makes the ending falls flat. Sorta speak.

Judgment: This is a fun movie that should not be taken seriously. 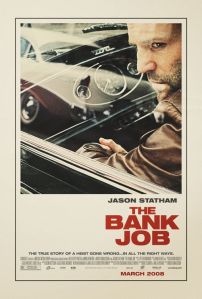 This movie flew way under the radar that it was barely a blip when hearing some moderately positive about The Bank Job after it was released in early 2008. I wanted to check out this movie. I’m glad I did, because it is a fantastic thrill ride.

It recounts the true story about bank robbery in 1971 when a car dealer, Terry (Jason Statham) that owes money from a sleazy smut peddler, Lew Vogel (David Suchet) is recruited by his friend, Martine Love (Saffron Burrows) to help rob a bank, Lloyds Bank United, that was upgrading their security system, which would leave them vulnerable.

Terry recruits his best friends, Dave and Kevin (Daniel Mays, Stephen Campbell Moore) to help him carry out the heist with the help of Guy Singer (James Faulkner), Bambas (Alki David) and Eddie (Michael Jibson) as a lookout.

The group doesn’t know that Martine is a secret informant for the government with Tim (Michael Lintern) as her liaison. The real reason for the robbery is to recover some incriminating photographs of Princess Margaret (Louise Chambers), and other top officials in compromising positions by shady character named Michael X (Peter de Jersey).

They think that everything will go according to plan, but everything that would go wrong, does to their benefit. It made them think that they were real professional bank robbers instead of a bunch of amateurs. After they pull of the bank heist, the shit hits the fan. Interpol, MI-5, corrupt cops and villains are after the group for various reasons.

This intense movie had me on the edge my seat at every twist and turn. The movie is not perfect. I had a problem about what happened to some of the characters at the end of the movie that were forgotten.

Some of the names of the real people were changed to protect them from any exposure. How could this movie be “based on a true story” when the people’s names have been changed, and possibly the situations for dramatic effects?

Judgment: An awesome, slick action movie that should be seen.

Where is the stone?

Personally, I have a lukewarm reception to some Guy Ritchie’s movies. I have seen some snippets of Snatch since it was released in 2000. This movie is currently #186 on the IMDB Top 250 of all time. Some people think that this movie is overrated. I don’t think so. It was a solid movie.

This is an ensemble piece about a bunch of bumbling crooks trying to get their hands on an 86-carat flawlessly cut diamond.

It starts with a struggling boxing promoter and also the narrator of the film, Turkish (Jason Statham) and his partner, Tommy (Stephen Graham) trying to repay a debt to a ruthless bookie, Brick Top (Alan Ford). They try to buy a caravan from an incomprehensible gypsy boxer, Mickey O’Neil (Brad Pitt).

Another plot outline is when a gambler, Franky Four Fingers (Benicio del Toro) steals the diamond after a jewel heist to possibly gamble it away. He is employed by Boris the Blade (Rade Šerbedžija).

There are a lot of twists and turns, backstabbing, and some genuine hilarious moments. A solid feature from Guy Ritchie.

There were some wink-wink moments in the movie when in one scene when Bullet Tooth Tony is roughing up a guy in a car, the radio is turned on to Madonna’s “Lucky Star.” How ironic.

Judgment: If you want to see a solid heist movie, then this movie is more your speed.