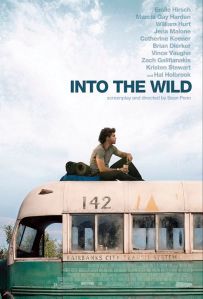 I’m going to paraphrase Thoreau here… rather than love, than money, than faith, than fame, than fairness… give me truth.

I was always wanted to see the #145 Film of All-Time on IMDb, Into the Wild where people in the movie blogger community was saying that this movie got shafted at the Oscars when it was only nominated in two categories for Best Editing and Best Supporting Actor for Hal Holbrook. People were showering this movie with endless amounts of praise. When I saw the movie was on the shelf at my local library, I jumped at the chance to rent it. After watching the movie, I was thinking to myself what is the big deal.

Bad boy actor, Sean Penn wrote the screenplay and directed the true life story of Christopher McCandless (Emile Hirsch) based on the book by Jon Krakauer. McCandless came from a privileged life in the early 90s. He graduated from Emory University, but he feels that his parents, Billie and Walt (Marcia Gay Harden, William Hurt) are living in a superficial world of wealth and affluence. Chris wanted to live in a world where money doesn’t matter.

He decides to sell his possessions, cut up his credit cards, cash out his life saving and abandon his car to hitchhike across the country to find his authentic self. He doesn’t tell his parents or his younger sister, Carine (Jena Malone) about his whereabouts.

The audience gets to see Chris having chance encounters with a hippie couple, Rainey and Jan (Brian H. Dierker, Catherine Keener) in Arizona, working for a farmer, Wayne (Vince Vaughn) in Iowa, meeting  a  girly that crushes on him, Tracy (Kristin Stewart) and a broken war vet, Ron Franz (Holbrook).

I understand that this movie was supposed to talk about living an authentic life, finding yourself in the world and all that. The whole spiel about quoting Thoreau, having the holier-than-thou attitude about other people left a bad taste in my mouth. It is a sad story. If I don’t care about the lead character, why should I care about this movie?

Judgment: The movie was gorgeous to look at, but it felt empty to me.

I heard some raves about Emile Hirsch’s performance in 2003’s, The Mudge Boy. People were complaining that this was a depressing, disturbing movie. I agree with the latter part.

When we meet Duncan Midge (Hirsch), his father, Edgar (Richard Jenkins) catches him with a cock in his mouth. No, not that. Get your head out of the gutter, people. He has his pet chicken named Chicken’s head in his mouth.

This is a broken family after the matriarch, Lydia (Sandra Gartner) dies of a heart attack while riding her bike in the country road. Edgar sees the very same traits in his sensitive son.

The Mudges live in small town America were young gay boys like Duncan have no outlet of normalcy. He begins to act out by dressing up in his mother’s furs and hangs out with the wrong crowd.

Duncan forms an unlikely friendship with the cocky troublemaker, Perry (Tom Guiry). Perry and his band of cronies try to teach Duncan how not to play and be friends with chickens. They wanted him to be cool like them.

Perry tries to flaunt his masculinity and heterosexuality in front of Duncan face when he showed him his privates. The more time that Duncan and Perry spend together, the closer they get to each other.

Whenever somebody makes fun of Duncan, Perry would defend him. They begin to grow closer to each other. Perry doesn’t want to have feelings for another boy and he acts out.

Edgar tries to make a man out of Duncan by forcing him to do more manly chores around the farm.

There are some scenes in this film that are very disturbing. There is a scene between Duncan and Perry when Perry forces himself on Duncan. He doesn’t rape him, but he does have sex with him.

I have to point out that I do not condone this behavior. Also, Perry does not use protection. I don’t care where you are, if you are discovering boy for the first time, do not have unprotected sex.

There is also a scene towards the end of the film when Duncan harms a chicken that freaked me out. People are talking about the merits of that scene. Was Duncan trying to end the grieving process of his mother? Was he trying to prove his maleness to Perry and his friends? Was Duncan trying to suppress his homosexuality by doing this act?

Both Duncan and Edgar try move on the their lives without Lydia.

If you have a strong stomach for disturbing subject matter, then I would suggest this film.