When the world slips you a Jeffrey, stroke the furry wall.

When you hear the word “spin-off”, it usually means impending doom. I did not like Forgotten Sarah Marshall that much. I thought the only highlight of the film was Russell Brand’s Zen rocker character of Aldous Snow. Now, Aldous Snow has he own star vehicle, Get Him to the Greek. It seems like a bad idea to me. Coming away from it, I felt like it was great decision to do so.

We follow Aldous Snow as his new album, African Child is about to drop. There is a media blitz promotion the hell out of it. There is also a video of same name that he performs with his on and off girlfriend of seven years and baby’s mama, Jackie Q (Rose Byrne). When his album comes out, it’s a huge bomb. A devastated Snow pulls a Kanye/Blohan/Winestone with him boozing it up, taking blow, exposing his naughty bits and much worse. He goes underground for awhile.

Jonah Hill—not reprising his role of Matthew the Waiter—is Aaron Green, an intern working for Pinnacle Records. He and his live-in girlfriend, Daphne (Elisabeth Moss) are trying to have sex, but with her hellish schedule, they couldn’t. He is frustrated as all get out.

Aaron gets his ass chewed out along with his co-workers from their boss, Sergio (Sean Combs) from sagging sales of their artists as of late. Sergio wants to know what can be done to remedy their dire situation. Aaron thinks that they should have a reunion concert with Aldous Snow to commemorate the tenth anniversary of him playing the Greek Theater. The subsequent live album was the highest selling in history.

One month later, Snow– who is in London at his mom’s flat—agrees to the gig at the Greek. Since it was Aaron’s idea, Sergio asks Aaron to get Snow, bring him back to New York for a stop at the Today Show and his aforementioned concert at the Greek all within 72 hours.

Aaron thinks it’s just a simple escort trip, but that would be boring. When the shit hits the fan, it splatters everywhere. Daphne breaks up with Aaron, because he doesn’t want to move to Seattle to recreate Grey’s Anatomy. In London, Aldous thought that the gig was in two months instead of three days. Let’s just say that he is unwilling to go unless he goes on his last bender before going to the States. He takes Aaron on his trip of sex, drugs and rock & roll.

This movie is vulgar, offensive and deplorable and I loved it for that. It didn’t give us frank and beans like Marshall did, but it did have its moments. I never thought that I would say this, but Puff Daddy – Puffy – P. Diddy – Sean Combs stole every since that he was in. I laugh my ass off when he came on screen. There are celebrity cameos up the wazoo like P!ink, Meredith Viera, Mario Lopez, Lars Ullrich, and many more. It seems like the long episode of Entourage.

This movie is not the next Hangover, but it does have its moments. I didn’t like the subplot with Aldous and Jackie Q– who supposed to be a parody of Fergie—which I didn’t get. The ending took the bromance a little bit too far. Like Marshall, it has pop culture references that would not mean shit int twenty years. It would seriously date the movie.

Judgment: I cannot believe that I would like a spin-off better than its predecessor.

Does your act just design to make sure no girl will ever sleep with you?

Funny People is a movie that I was eagerly anticipating for writer/director Judd Apatow. Thoroughly enjoying his previous movies, I want utterly disappointed with this movie.

In the first trailer of this movie, the whole plot was spoiled. I thought, “What the fuck?” That knocked my rating down considerably.

Adam Sandler is playing a twisted version of himself by the name of George Simmons. A comedian that is unfulfilled by his life with the kiddie movies that he makes, the spacious mansion and he does not have anybody in his life.

He discovers that he has a form of leukemia. Coming to terms with his “death sentence”, he hires a struggling stand-up comic, Ira (Seth Rogen) as an assistant to help him write jokes.

George wants to get back together with the one that got away, Laura (Leslie Mann), but he is set in his ways that he won’t realize that his brand of humor drives people away.

The movie has some funny bits especially with Jonah Hill with his one-liners and Aziz Ansari. Most of the time, crickets were heard in the audience during most of the movie.

I was very bored with the film. I was looking at my shoes, scratching two week old mosquito bites, yawning and dozing a little bit. That’s not good.

Trying to mix comedy with drama doesn’t work. It was a real downer and not hopeful. Some of the characters were horrible human beings. You cannot root for them. I didn’t care about any of them.

George Simmons was fixated on the size of Ira’s cock and balls. The sexual puns and jokes were jarring. Overkill. Enough the cock, balls, sex and asshole jokes. Enough!

Judgment: This movie does not live up to its name. How ironic. 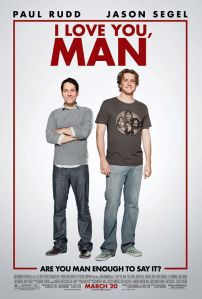 Why is it weird that I have girl friends?

Saturday night, I wanted to catch up with some movies that I missed last month. The first of these is I Love You, Man. The bromantic comedy– I hate that saying by the way– that stars Paul Rudd and Jason Segel. After seeing Observe and Report with its WTF ending, I found this film quite refreshing.

Peter Klaven (Rudd) is a man friend deficient, real estate agent that is trying to sell the home of Lou Ferrigno, without much success. At the beginning of the movie, Peter proposes to his girlfriend, Zooey (Rashida Jones).

When they are beginning to plan for the wedding, they realize that Peter does not have any close male friends to be a part of the wedding. With the help of his mother, Joyce (Jane Curtin) and his gay brother, Robbie (Andy Samberg), Peter goes on a series of “man dates” to find the best man for his wedding. Hilarity ensues.

At an open house, Peter meets Sydney Fife (Segel), a manchild investment broker that show Peter how to be man. He ushers him into the world of man. Having a best friend that is a man.

This is the gayest straight movie ever. This some gay undertones to the movie, but it tries to be so macho. It was hilarious. I enjoyed this movie.

I identified with the Paul Rudd character. I have girl friends and not that many guy friends. I sympathize with Peter’s plight.

Judgment: I suggest check this movie out. There is something different for people to see.