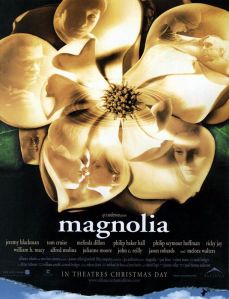 Stephen Jay Schneider chose this movie as one of the “1001 Movies You Must See Before You Die.” He compiled a massive list from the classic to the obscure for his anthology. The most worthy movies are chosen to be on this list. Every year, there is a revision to include the most essential movies to be on the minds of film buffs everywhere.

I was disheartened that Magnolia was chosen as one of the movies that the 1001 Movie Club has to review. I have seen this movie after it made a big splash at the Oscars in 2000. When I saw the film, I did not have the best things to say about the movie. I have chosen not to see the movie again; I am basing this review on memory.

Director Paul Thomas Anderson interweaves almost a dozen tiny stories that seems to not to mesh that somehow thinly interconnects. The narrator Ricky Jay shows the random ironic coincidences of life. One story revolves around a hapless police officer, Jim Kurning (John C. Reilly) is called to the scene of a dead body being discovered in the closet of a woman, Marcie (Cleo King). As the night progresses, other officers that arrive to the scene are ignoring his assessments about what happens.

The anchor of the story is about a television producer, Earl Partridge (Jason Robards) on his deathbed. He is succumbing to late stage cancer, and is cared for by his male nurse, Phil (Philip Seymour Hoffman). Earl asks Phil to find his estranged son, Frank, because his much younger wife, Linda (Julianne Moore) is trying to get enough morphine to euthanize him.

Mackey (Tom Cruise) is self-help “guru” with a foul mouth that teaches man about manipulating women into having sex with them. His plan, “Seduce and Destroy” have men going in droves to listen to his polemics about gullible and dealing with the power of cock. After his seminar, a sly reporter, Gwenovier (April Grace) interviews Mackey about his bullshit rhetoric until she fins a chink in his armor.

A former game show wiz kid, Donnie Smith (William H. Macy) tries to get his life back into order to his former glory. The game show storyline also incorporates a former game show host of “What Do Kids Know?” Jimmy Gator (Philip Baker Hall) that recently finds out that he has cancer. He seeks out to reconnect with his cokehead daughter, Claudia (Melora Walters) to tell her. In addition, there is a stage father, Rick (Michael Bowen) that pushes his son, Stanley (Jeremy Blackman) to win the prize money to help out with his acting career.

I thought that the stories were somewhat interesting, but not so much that I could be invested in most of them. The only part of the movie that marginally liked was the Earl Partridge storyline. I thought that it was very poignant. The ending was huge WTF for me. Really? Really! Tom Cruise got the most acclaim for this movie, because he was a leading man taking a supporting role in an ensemble movie. His personal segment was not that intriguing, but when he shows up in another one. That was great.

1001 Movies You Must See Before You Die

Judgment: Why do I feel like a Crash all over again?