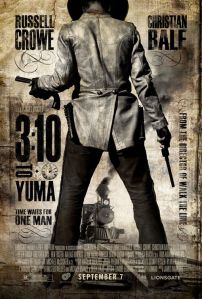 I’ve always liked you Byron, but you never know when to shut up. Even bad men love their mommas.

Trying to acclimate myself to the western genre, I watched the 2007 remake of 3:10 to Yuma. The movie has an all-star cast with Russell Crowe and Christian Bale, but the movie was mind-numbing. It was like a dead fish thrashing around.

Ben Wade (Crowe) is a famous outlaw in the Old West that is captured by rebel brigade that includes a rancher, Dan Evans (Bale). He is being transported on a train to Yuma so he could be executed by hanging. His partner, Charlie Prince (Ben Foster) wants to stop the transport.

Nothing happens in the movie. The movie was so boring that I had to turn it off. It is the same premise with the lead man wronged by the government to take their land and they go on a journey to get money for their money. Do something different, please.

It tried to be a modern western, but it rang false. I did not believe that these people lived in the 1880s.

Judgment: Watch the original movie instead of this drivel.