← FB Rant: Are You the Everyman Superhero Type?
New “An Education” Trailer → 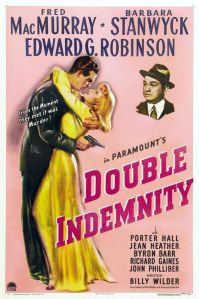 How could I have known that murder could sometimes smell like honeysuckle?

On the suggestion of my film blogger, Chazz Lyons from Gone Cinema Poaching, I watched Double Indemnity last night.

Nominated for seven Academy Awards including Best Picture, Best Director for Billy Wilder and Best Actress for Barbara Stanwyck. It is currently #47 on the Top 250 Films of All Time on IMDb. It deserves to be there.

Based on the novel, “Double Indemnity in Three of a Kind” by James M. Cain; director Billy Wilder and co-screenwriter Raymond Chandler sends the viewer a wild rise in the late 1930s Los Angeles.

Walter Neff (Fred MacMurray) is an insurance salesman that is infatuated with a beautiful married femme fatale, Phyllis Dietrichson (Barbara Stanwyck). Walter comes by the Dietrichson residence to follow up on some paperwork that the husband, Mr. Dietrichson (Tom Powers).

Over subsequent visits, Phyllis tells Walter about the mistreatment that her husband does toward her. They decide to bump off the husband so they could get the money for the life insurance policy.

I loved every aspect of this movie. The rapid fire dialogue caught me off guard, but I got into it quickly. The acting across the board was fantastic. The score was intense.

Judgment: A masterful thrill ride with excellent dialogue, suspense and great performances. A must see!

← FB Rant: Are You the Everyman Superhero Type?
New “An Education” Trailer →